Welcome to The Chartered Institute of Arbitrators – New York Branch

The Chartered Institute of Arbitrators is a learned society and charity, headquartered in London, which provides worldwide scholarship and professional development for all areas of alternative dispute resolution. It is also the only accrediting body for arbitrators which confers credentials that are widely recognized and respected around the world.

The Chartered Institute’s New York Branch represents the Institute in New York, New Jersey and Connecticut. Membership in the Branch is automatic for all members of the Institute in the region and available on request to Institute members outside the region. Anyone interested in alternative dispute resolution can become a member of the Chartered Institute by fulfilling the requirements for the desired level of membership for which they are qualified (Membership information including an on-line application is available by clicking here.)

The Branch regularly collaborates with arbitral and professional organizations worldwide and local academic institutions to bring our members informative and timely professional programs, speakers, conferences and courses that advance the use and practice of ADR and enhance the abilities and opportunities of our members. The Branch also offers regular social gatherings at which members can meet new colleagues and renew existing friendships both within the Branch and with others in the ADR community.

A Message from the Branch Chair Since the CIArb NY Branch was formed six years ago, the Branch has been a hard-working and vital contributor to the New York-based international arbitration community as well as to the Institute’s London-based work. We have experienced a 3-fold growth in Institute membership in the Branch’s territory (the States of New York, New Jersey and Connecticut). The Institute recently designated Columbia Law School Professor George A. Bermann as the Branch’s Patron. Thomas D. Halket, a founder and immediate past chair of the Branch, is the Institute’s global President for 2019. Tom is the first Institute President ever elected from the United States.

The Branch’s many programs and events have ranged from roundtable presentations on practical topics for members and guests (for example, CYBERSECURITY HOW-TO FOR ARBITRATORS) to the Branch’s 5-day COLUMBIA – CIARB COMPREHENSIVE COURSE ON INTERNATIONAL ARBITRATION offered annually at the conclusion of the academic year. The Comprehensive Course features an all-star, all-volunteer faculty of prominent advocates, arbitrators and academics led by Professor Bermann. During its first five years, the Course has attracted registrants from around the globe, including practitioners, judges, government attorneys, academics and graduate students. To promote diversity, Columbia and the Branch offered full scholarships this year to the 2018-19 AAA Higginbotham Fellows, three of whom attended the Course.

The Branch also has presented, for each of the past five years, the Chartered Institute’s Accelerated Route to Fellowship (ARF). The Branch offers the ARF during the week immediately following the Comprehensive Course so that stalwarts who travel from afar for the 5-day Course can stay on to participate in the 2.5-day ARF.  A transition in ARF leadership this year, from Steven A. Certilman, who has so ably led the ARF in past years, to Richard F. Ziegler and Michele S. Riley, was seamless.  Our experienced ARF faculty (Michele Riley, Richard Ziegler, Steven Certilman, Stephanie Cohen, Matthew Draper, William G. Horton, Merriann Panarella, Peter Pettibone, and Jay Safer) once again received kudos from this year’s ARF class.

The Branch co-sponsors and supports the efforts and programming of locally active arbitral institutions, arbitration-related organizations and bar association groups. Our collaborative efforts turned a new page earlier this year when the Branch entered into a Memorandum of Understanding with the New York International Arbitration Center, Inc. (NYIAC) for the purpose of jointly developing the first New York Arbitration Week.  Stay tuned.  Even more important, stay or get involved! 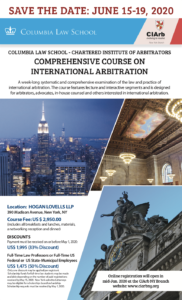 Professor George A. Bermann is Patron of the New York Branch

Thomas D. Halket is the 2019 President of the Chartered Institute